NEW YORK CITY – On behalf of the Wind Forest team, we are delighted to announce that our proposal has won the LAGI Glasgow international design competition. Conceived by Dalziel + Scullion, Qmulus Ltd., Yeadon Space Agency, and ZM Architecture, Wind Forest is a permanent public art installation that uses an innovative form of wind power to generate enough electricity for approximately 300 dwellings. The project will be an important part of the new mixed-use development currently being planned for 100 Acre Hill (also known as Dundas Hill) in Glasgow, Scotland.

The LAGI Glasgow competition challenged participants to bring creative solutions for a clean energy infrastructure to a brownfield site. It was a brief that our team felt particularly engaged by. How can an artwork provide utility amounts of energy for the imbedded community and do this right in the heart of the development? And, how can an artwork make a significant contribution to the evolution of a new Smart City initiative?

We were keen to address this brief in a way that was imaginative, resourceful and exciting, examining the context of the location from its geological origins through to its imagined interconnected future. Beyond Glasgow, our Wind Forest proposition also resonates with issues connected with the reinvention of urban brownfield sites throughout multiple global post-industrial cities. 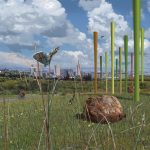 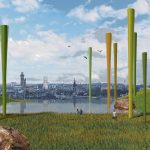 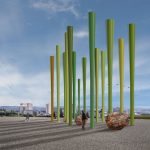 Wind Forest aims to transform the post-industrial landscape of 100 Acre Hill, with an enriched infrastructure that is based on ideas around technology, landscape and context. On the site, groves of bladeless wind turbines with different spatial, sensory and environmental qualities are planned. Hence, Wind Forest mimics the activity of a forest by absorbing energy from the passing wind, and distributing it to its diverse and connected community ecosystem.

Wind Forest works with the physical landscape of 100 Acre Hill, upon which one hundred 4 kW single stem-like wind turbines will be planted. A revolution in wind energy design, these stems have no blades, have no gears or bearings, are noiseless, and do not present a hazard to birds. Instead, they generate electricity by oscillating, resulting in reduced maintenance costs, reduced manufacturing costs, reduced transportation costs, and smaller foundations.

Each of the stems will be colored using a palette that draws from the year-round colors of natural deciduous woodlands. The 13-meter high stems (about the average height of a Rowan, Hazel or Hawthorn tree) generate power by oscillating from a fixed point in the lower half of the structure. The top of each stem has the capacity to circle up to 2 meters across which when amplified over the entire forest would be a unique and exciting spectacle to stand amongst. Together, they will power about 300 dwellings.

Our techno-boreal forest is arranged as three groves that distinguish distinct spaces across the site, while generating energy by swaying in the wind. One of the groves is at a gathering place or common. The second grove forms a central wetlands area with a natural SUDS (sustainable urban drainage system) basin, and the third is a glade at the edge of the site that opens onto spectacular views of Park Circus and the City. This particular grove is most visible from Glasgow City Center and it will be sited partially on one of the sloping sites that is more difficult to build on. All sites are exposed areas in no build zones within the current masterplan and will be interconnected through a path network. 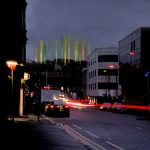 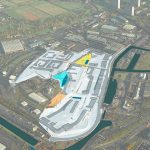 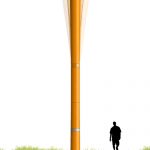 Hundred Acre Hill (or Dundas Hill, as it was later renamed) has a rich geological history, and bears the fingerprint of the many different forces that have shaped it. As one of Glasgow’s 118 drumlins, these small elliptical-shaped hills were formed through glaciation, resulting in a distinctive egg-like form indicating the direction of the ancient ice flow. Typically, these hills occur in swarms and are arranged parallel to each other in drumlin fields. Glasgow, is one of two examples (the other being Boston, Massachusetts) of a major conurbation built upon a drumlin field. The presence of these hills is captured by local names such as Jordanhill, Maryhill, Firhill, Garnethill, Dowanhill, etc.

The next great shapers of the Hill were the Victorian industrialists who carved canals into its side and erected huge brick chimneys, and eventually concrete cooling towers. These industries left behind a legacy of materials, including a great deal of rubble, which now needs to be managed as the site is developed. Our techno-boreal Wind Forest project repurposes some of this material to create a number of massive forms reminiscent of the erratic boulders left behind by retreating glaciers. The ‘moraine’ from the site’s industrial past is combined with hundreds of bricks excavated from the site, many of which still bear the name of the clay pits where they were made, often within 20 miles of the site.

We have won the commission and Wind Forest has passed the discovery stage. The proposal is currently on exhibit at The Lighthouse, Scotland’s premier architecture gallery in Glasgow, until July, 29, 2016. We are now advancing the concept and entering into design development.