At Yeadon Space Agency, we’ve been working on the development of various biodegradable polymers that can rapidly decay, for a range of short-lived applications in architecture and design. We’ve worked on a couple of dozen different approaches to making the polymers, and are now advancing the most promising discoveries by making strategic changes to the composition of the materials. We are also extending their functionality by doping them with impurities to change their properties. The bioplastic above, for example, is soft and sticky, and emits light. Other versions have been strengthened with natural fibers.

The core components are triglycerides found in fats and oils, which are a waste byproduct of biodiesel production, and connective peptides and proteins derived from the collagen of cattle skin, bones, and tissue. So this bioplastic has an interesting lifecycle: waste-to-resource-to-biodegradable waste. We have found the substance to be extraordinarily resistant to certain solvents (e.g., acetone and tetrahydrofuran) that would dissolve other forms of biodegradable plastic, such as PLA. At the same time, the bioplastic does not offer any long-term resistance to water. 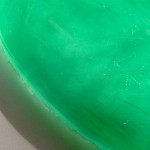 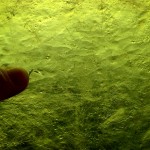 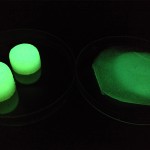