We collaborated with designer Robin Liu to create this product concept for Kikkerland. These bears would be part of a suite of animal ice packs that could be tossed in a child’s lunch bag. As the bears warm up, their tummies turn transparent, revealing what each bear ate for lunch. The product uses a thermochromic smart material in order to achieve the effect. 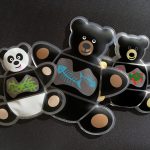 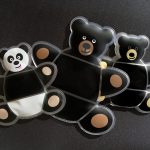